I'm going to reveal a trade secret. The most effective, easy-to-use tool for designing software architecture that I've ever used: 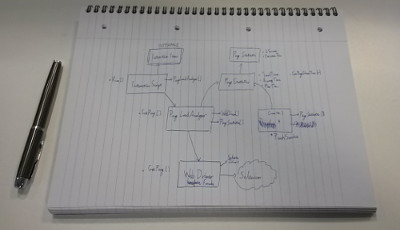 Screenshot showing some of the many features of the product including annotations, fast refactoring, and an almost infinite library of arrows, boxes and callouts instantly accessible

It might seem low-tech and old-fashioned but raiding the stationery cupboard or getting up to draw on a whiteboard is hugely more effective than spending an hour in Enterprise Architect putting together a document full of eyeball-searing colours and wacky gradients. (For some reason this seems to be the default state of output from Enterprise Architect. I'm not sure why.)

I like the lo-fi approach not just because it's quick, but because you stop concentrating on presentation and start concentrating on ideas. You might think a Visio diagram appears neat and professional but it's flooding your brain with signals that are nothing to do with the architecture you're trying to describe: "why is that pink?", "how do I align this arrow?", "where's the box with rounded corners?" Plus it gives off a false sense of finality, especially if you then go and print out multiple copies.

A notepad or whiteboard full of scribbles, on the other hand, is obviously a group of ideas in a state of flux. It practically invites changes by making them cost so little - just pick up a pen and make them.

The key here is friction, and it comes down to those tenets that make the Agile world so different from both waterfall and flying by the seat of your pants. We still plan and design, but we also intend to revisit and revise those plans as we develop. Therefore if we make these artifacts disposable, there's less pain if we have to throw them away - we haven't created an internal friction where we don't change a design because "it took hours to make". There's a time to break out the heavyweight software tools and their gradient fills, but it's nearer the end of development when the architecture is locked down and you're finishing up documenting what you've created, not at the start.

One of the key indicators of a successful tech company is that the development team have a lot of ownership. It's something that Scrum requires, by the way - but as I've noted

I've just been writing some unit tests prior to doing a bit of development, and it's revealed some interesting things about the codebase I'm working on. I think developers shy away from test-driven